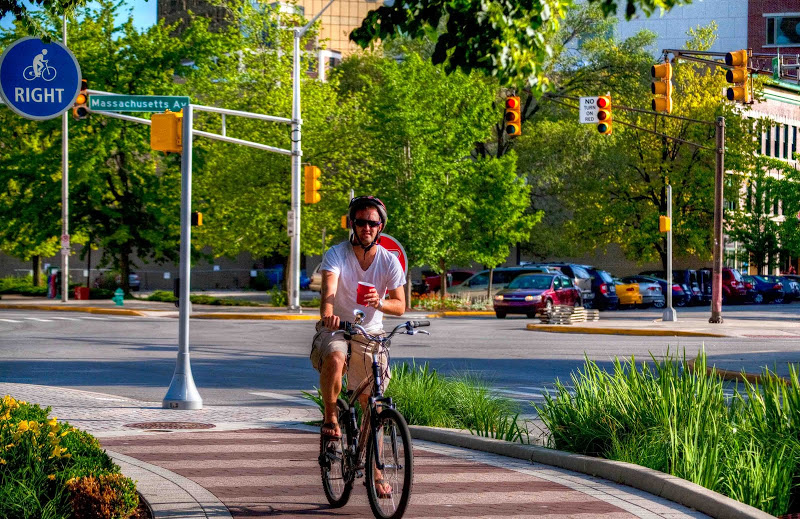 Happy Trails To You

Local group announces Payne Connect10n Plaza, a trailhead that will honor more than a decade of community building and trail construction.

In April 2007, construction on the Indianapolis Cultural Trail: A Legacy of Gene & Marilyn Glick began on Alabama Street. A mix of construction signs, barricades and jackhammers hinted at the amount of work required to construct an eight-mile bike and pedestrian path through the city’s urban core. But behind the tools and signs were six years of brainstorming, partnership building, fundraising and community planning paved the way for the project. Since that 2007 ground-breaking ceremony and over $6 million in investment, the Indianapolis Cultural Trail has created connections between Indianapolis’ five Cultural Districts, several neighborhoods, entertainment venues, and central Indiana’s greenway system.

Central Indiana Community Foundation CEO and President, Brian Payne, and wife, Gail Payne, have championed, shepherded and fretted over the concept from a “big, bold and beautiful” idea to a broad partnership that has made the Trail a reality. Over time that partnership has grown to include the City of Indianapolis, local philanthropists, federal funding sources, corporate leaders, artists and many others. Though the Trail was built to string downtown’s cultural institutions together for pedestrians and bicyclists, its philosophical soul lies in a focus on connectivity – for the city and for the many communities through which the trails travel.

That connectivity is reflected in The East 10th Street Civic Association’s recent announcement about the creation of the “Payne Connect10n”, a plaza that will provide a key connection point on the city’s near eastside. At the convergence of the Indianapolis Cultural Trail: A Legacy of Gene & Marilyn Glick, the Monon Trail, and the future Pogue’s Run Trail Connector, the project will serve as a key connector at the intersection of East 10th Street and Massachusetts Avenue. Named in honor of Brian & Gail Payne’s vision and development of the Indianapolis Cultural Trail, the site will include directional, interpretive and identity signage, globular lanterns and a trailhead sculpture.

The Payne Connect10n Plaza, projected to be completed and dedicated in Fall 2012, culminates several years of community planning and volunteering. Through the East 10th Street Commercial Revitalization Work Program, the Project for Public Spaces and the East 10th Street Urban Design & Gateway Plan, many community partners have been focused on creating a more beautiful and connected environment along East 10th Street. The Super Bowl Legacy Project and Lilly Day of Service corporate volunteer project have both contributed support – from finances to manpower – to the first phase of the project; the payne connect10n plaza will be the second phase.