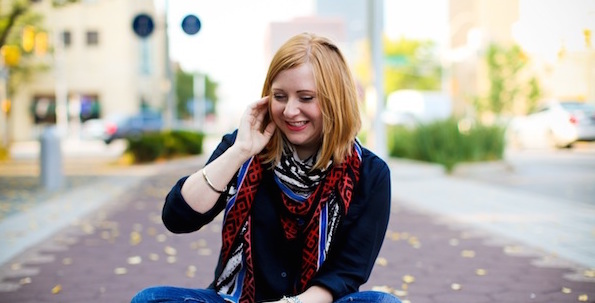 You meet the most interesting people along the Indianapolis Cultural Trail. Here’s one now: Karissa Hulse, Director of Programs and Community Partnerships at IndyHub, wife to Brett and mother to Charlie.

How does the Indy Cultural Trail connect you to the city?

​Home, my work, my son’s childcare, our church — most of my daily life happens within a few blocks of the Cultural Trail so it is quite literally how I navigate the city. During the workdays, I intentionally try to plan meetings near the Trail. And on weekends, my husband, Brett, and I will often go walk on the Canal with our son, ride our bikes to the Zoo, or head down to Fletcher Place to meet up with friends. On a recent weekend, my husband’s 16-year old cousin was visiting from St. Louis. Sixteen suddenly felt light years away for both of us, but we got him on a Pacers Bikeshare bike and just rode around the city for a few hours. (His mom later told us he came back telling her that one day he thought it’d be cool to live here!)

Most recreational trails will take you away from the busyness of main streets and business districts. I think what I love most about the Trail is that it weaves right through those places, and in some has even spurred additional development.

What is your favorite spot downtown?

The 6th floor of Central Library I think is perhaps one of the best and least seen views of downtown, and I really love the spot off Mass Ave where the Cultural Trail tucks into an alley to get over to College Avenue. That’s now on my route to work and I love it!

What is the best part of your job as Director of Programs and Community Partnerships at IndyHub?

​The vantage from which I get to absorb how much happens in this city, and even play a small role. At IndyHub, we are working to build connections — among one another, with community organizations working on both micro and macro issues, and to Indianapolis as a place where our people can really do something to shape the city. My days really don’t always look the same, which is where the thrills are, but as a creature of habit can also be a challenge.

Tell us about being a one-car family.

​We moved back downtown in the late summer of 2013. (M​y husband​, Brett, ​and I lived downtown when we were first married​.​)​ At that time, we were locked into two car payments and even with the relatively short commute we had from Irvington, we were new parents and on a mission to simplify our lives. The abbreviated story goes like this: We had the yard sale of all yard sales (and the last one we ever want to have), and swapped a house with a yard for a downtown apartment and bicycles. Neither of us had really ridden bikes since our pre-driver’s license days and we aren’t the ones you’ll see in full out spandex making lengthy commutes by bike.

It works for us because of our geography, and that was intentional. It does take some planning – but that’s really become our norm, and there are days our one car doesn’t move from its parking space. When my husband and I both need the car at the same time​, one of us uses Uber. The occasional fare is really minimal when compared to what we’d spend to maintain a second car. I’m hopefully anxious for the future of an expanded IndyGo system, I think it will be the game changer here. And I love that our son is growing up seeing us use different ways of getting around. It isn’t that cars don’t have a place, but I don’t believe future growth in our country will be as heavily car-centric as the past several decades have been.

My bike is an ’80s racing bike, which the awesome people at Freewheelin’ refurbished and swapped the original handlebars for upright ones. I added a basket on the front because I don’t always travel light, a bell, and a rear bike rack to be able to secure a seat for my son.

His seat is a Copilot Taxi, which is primarily what we use on weekdays, and for longer distances on weekends. He also has a Strider balance bike now, and rides that if we’re walking — he can get going pretty fast on it! It’s essentially a two-wheeled bike without pedals, and it works like a scooter with a seat so he can pick his feet up and coast. Anytime he’s on it, passers-by, kids and adults alike, can’t get over that he doesn’t have training wheels. He was two years old when we got it last summer. It took him no time at all to figure out his balance on that bike. I’m a believer!

Do you have an interesting story to tell? Let us know and you might be our next Tales from the Trail profile.