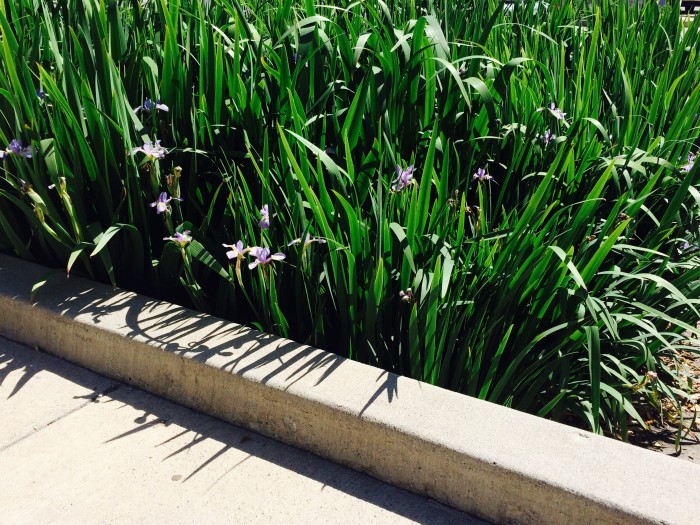 Beyond its intrinsic value as an active transportation and recreational asset for residents and visitors, the Indianapolis Cultural Trail plays a big part in the greening of downtown Indianapolis.

Before the Trail, there was concrete, inherently impervious and a collector of automotive pollution, which runs off to stormwater drains and ultimately, the city’s water supply after a heavy rain. After Trail construction, there are over 25,000 square feet of new stormwater planters, or bioswales. Below is a great video that shares many of the sustainability initiatives along the Trail, including the use of stormwater planters.

What is a bioswale?

A bioswale is a landscape element that:

The Cultural Trail’s bioswales divert approximately four million gallons of rainwater per year; the recessed structures have an open bottom and are planted with specifically chosen, drought-tolerant, native plant species, which enable stormwater to drain slowly into the ground. They reduce runoff, flow rate, volume and pollutants and recharge the groundwater.

In a case study by the U.S. Department of Transportation, Public Works Director Lori Miser said the team behind the Cultural Trail was “conscientious about making sure they were as sustainable as possible in the design and construction of the trail.”

The city had not used stormwater planters before, and from the same study, Trail designer Kevin Osburn said the planters turned out to be one of the most successful components of the Trail and are now a tool in the city’s toolbox. A tool that saves the city saves money by not having to treat the water that is now diverted to the bioswales. And, the stormwater planters beautify the streetscape of downtown Indianapolis, while providing a natural barrier from vehicle traffic.

How You Can Help

As you are enjoying the Trail, if you see litter, please pick it up. Don’t walk or park bikes in the landscape beds and be on the lookout for clean-up volunteer opportunities in the Spring and Fall sponsored by the Cultural Trail.

Let us know what you think of the stormwater planters.