There are hundreds of businesses along the Indianapolis Cultural Trail that have helped transform the urban core, including TwoDEEP Brewing Co., who just celebrated their one-year anniversary. TwoDEEP is located just north of the Glick Peace Walk on Capitol Avenue. 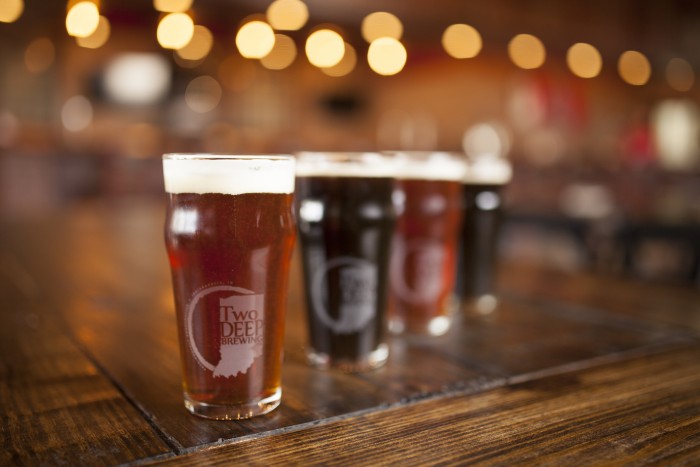 Tell us about your business.

TwoDEEP Brewing Co. is a malt-focused production brewery and TapRoom located in downtown Indianapolis. We opened our doors in August of 2014 and since then we’ve been brewing, pouring, and toasting to passionately handcrafted beer! Our TwoDEEP Brewing Co. family has grown to include five full-time employees, five part-time employees and an amazing group of volunteers.

What motivated you to start your business?

Our Founder, Owner & Director of Brewing Shenanigans Andy Meyer started home-brewing circa 2006. Once he got to the point where he was brewing faster than he could drink, he realized it had to be more than just a hobby. His passion for brewing and the support of good friends and family fueled the motivation to found TwoDEEP Brewing Co.

What’s the story behind the name “TwoDEEP Brewing Co.?”
“TwoDEEP” is a nod to our home brewing start. Andy began his home brewing shenanigans with two beer styles—an English Brown and an Amber. When it came time to choose a brewery name he wanted something that would be a constant reminder to stay true to our roots. That  brought him back to how it all began with those two beers: TwoDEEP.

What has being on the Cultural Trail done for your business?

We’ve been located on Trail since we opened in August last year. The Cultural Trail brings runners, bikers, and other locals to the TapRoom. It’s like a yellow brick road that brings you to TwoDEEP Brewing Co. People come walking/running/riding along the Trail, they see TwoDEEP Brewing Co. and think ‘I deserve a beer.’ And they certainly do!

What is your favorite thing about Indianapolis?

Its people…and its booming craft beer scene, of course. But really, Hoosiers are by nature friendly, hospitable and they like to support the local, home-grown guy. With one year under our belt, we’d like to thank the people of Indianapolis for seeking out and loving TwoDEEP Brewing Co. and for being incredibly supportive of our brewing shenanigans.

What does “community” mean to you?

Community starts with a collective group who share similar values and goals. Every community needs a ‘place’ as well, that being a space where people can gather and have a sense of belonging.  You can build ‘place,’ but it’s the community that makes it what it is—Colts fans have Lucas Oil Stadium, gamers have Gen Con, race fans have the IMS.

The TwoDEEP Brewing Co. TapRoom has definitely developed a strong sense of ‘place.’  We have a community of TapRoom regulars who we see at least once a week and who we can call friends. It’s always nice to have a place where everyone knows your name and where you can make yourself at home. We like to think that we are their Cheers!

Next time you are on the Canal or the Glick Peace Walk make a detour to TwoDEEP Brewing Co. at 714 N. Capitol Ave. Grab a pint, navigate a flight, or grab some beer to go! Open Tuesday through Sunday.