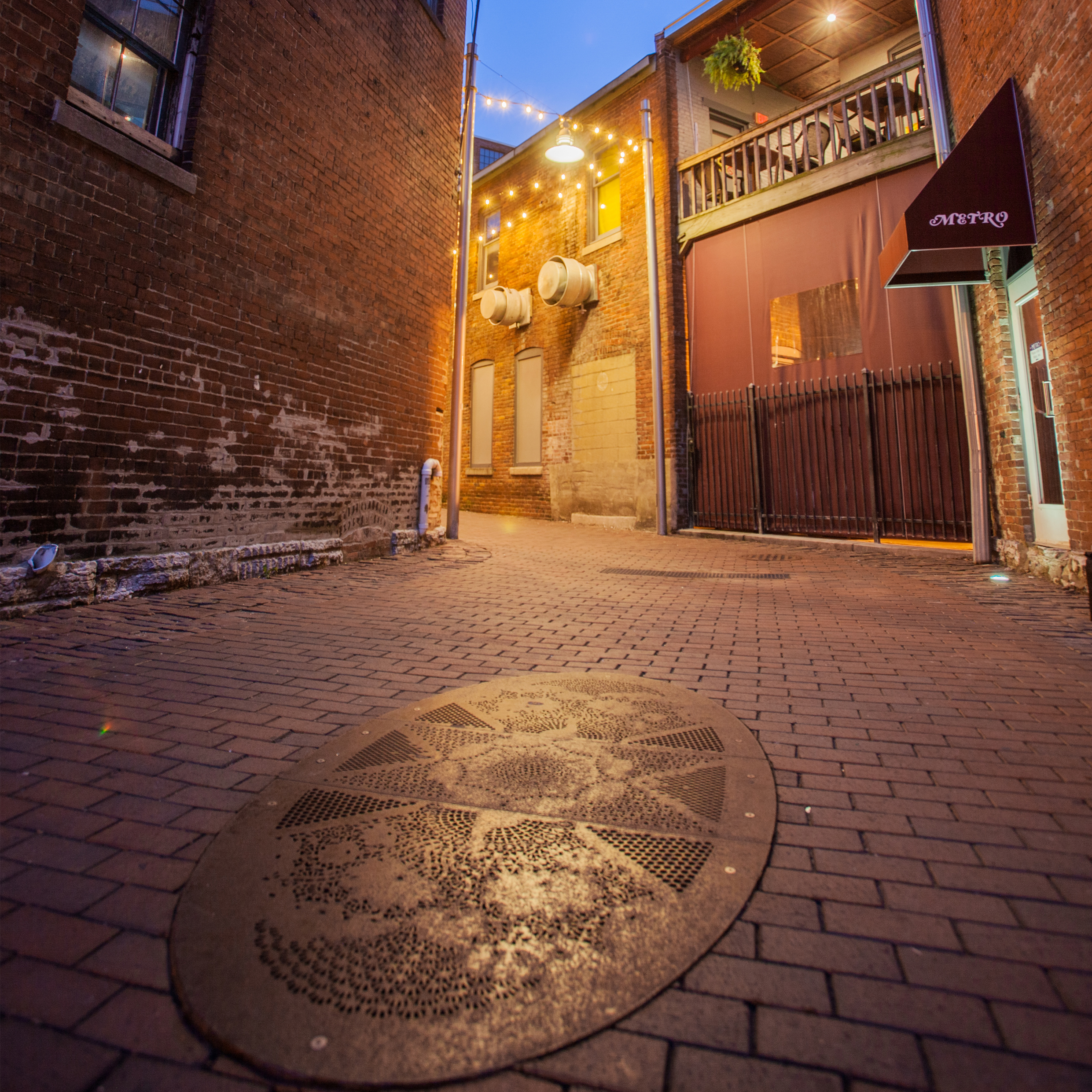 Located in an alley off the 700 block of Massachusetts Avenue

“Chatham Passage” is composed of a sunken concrete vault, an ornate artist-designed steel grate, an underground scent machine, and LED lighting. The project pays homage to both the historic and the contemporary uses of the space.

Historically, the Real Silk Hosiery Mill was located off this alley (the historic building has been converted into condominiums). The mill was opened in 1922 and manufactured intimate apparel—hosiery, underwear, and lingerie. After falling on hard times during the Depression, Gustav Efroymson, a department store owner, purchased the mill. The mill ceased operations in the 1950s. Currently, the area is one of the city’s most successful Cultural Districts and is home to many locally owned restaurants, boutiques, and nightclubs. (Descendants of Gustav Efroymson remain in Indianapolis and are founding supporters of the Cultural Trail as well as being supporters of many other arts and cultural initiatives.)

The vault form references the many coal vaults found off the basements of the historic structures in the area. The beautifully designed grate is made of modern COR-TEN steel yet its design seems to nod to art deco and the intricate patterning from the era of the Real Silk Mill. The scent machine, a modern technology, releases a floral aroma into the vault that then fills the alleyway. Instead of smelling trash or other undesirable scents in this hidden public space, one smells English roses referencing perfume or rose gardens—things historically associated with luxury and intimacy.

The engagement of many of the senses and the ethereal qualities of the project are intended to create an emotional environment that allows trail users to form unique relationships with the Indianapolis cityscape of yesterday, today and tomorrow.

Sean Derry is a conceptual artist whose public projects seek to connect a site’s history with its current context and use. Derry earned his Bachelor of Arts degree in studio art from the University of Alaska, Anchorage, and his Masters of Fine Art in studio art from The Ohio State University, where he studied with internationally renowned artist Ann Hamilton. Derry completed a successful site-specific public art project in Indianapolis in 2005 as a finalist in the Great Ideas Competition managed by the Arts Council of Indianapolis. His project “Charting Pogue’s Run” received national recognition at the annual conference of the Americans for the Arts when it was selected by the artist Mary Miss and Robert Rindler, artist and president of the Milwaukee Institute of Art and Design, to be featured in the Public Art Year in Review as one of the most innovative and exciting public art projects to happen in the country that year. A former resident of Bloomington, Indiana, he now lives in Pittsburgh, Pennsylvania.