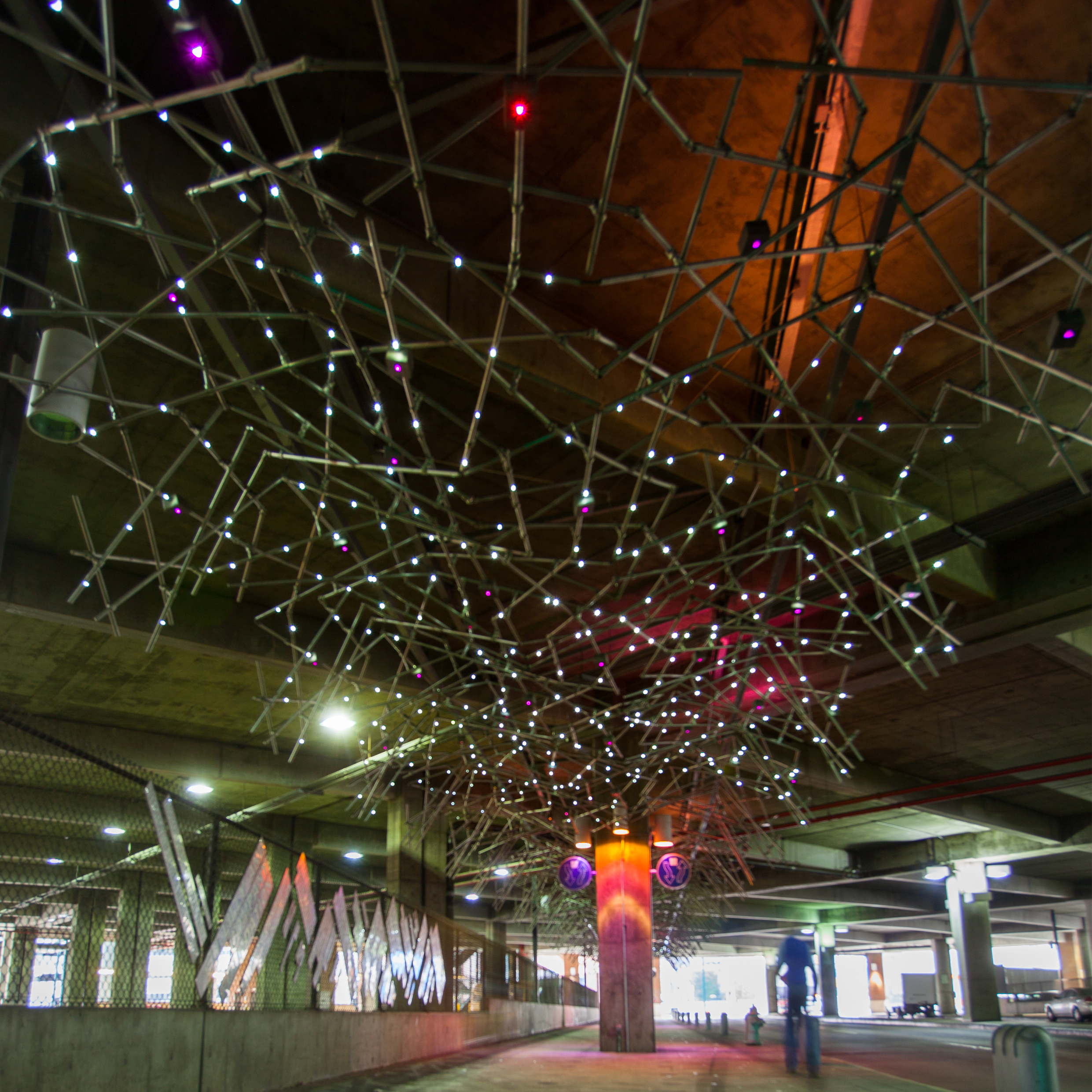 Located inside the Virginia Avenue garage, south of Maryland Street

Generously supported through a grant from ArtPlace. (link to http://www.artplaceamerica.org)

“As you walk through the tunnel, as you cycle through, a swarm of fireflies – above you, below you – gathers around you & lights your way; one sparkle attracts another, like a magnet…” explains Vito Acconci, founder of Acconci Studio based in New York City. “When someone passes you, when someone comes toward you, some sparkles veer off in a different direction, and a new flock of fireflies emerges.”

When Vito Acconci, the principal designer at Acconci Studio, was invited to visit Indianapolis in 2007, he asked to be taken to the Cultural Trail’s biggest design problem. Mindy Taylor Ross, the Trail’s curator and public art coordinator, took Acconci to the Virginia Avenue garage, a dark space adjacent to both the NBA basketball arena and the Marion County jail. The garage straddles Virginia Avenue, the most direct route from the city center to the historic urban neighborhoods of Fletcher Place and the Fountain Square Cultural District. The Cultural Trail’s management and design team knew that the Trail’s design should provide a reconnection between the downtown core and these important urban neighborhoods. CICF and the City of Indianapolis always knew that this space would need a superb artist at the helm and additional financial resources to transform this space from a dark, intimidating place to a dynamic, illuminated corridor that urban dwellers and families alike would feel safe visiting and comfortable walking and riding through.

“Swarm Street” is composed of a thousand LED-lights embedded in the pavement and another thousand LED-lights within an open steel-framework above. As one walks through, as one cycles through, one activates sensors that turn on lights that swarm around you as you move. Each sensor informs its neighbors, so that lights start to turn on as you approach them & start turning off as you move further away. These swarms not only demarcate a user’s personal space but they signify when our space joins another, symbolically blurring the lines between public and private, individual and community.

Vito Acconci is one of the most important figures in art and architecture working today. From his days as a poet in the mid-1960’s, to his groundbreaking performance works of the 1970’s, and finally to the founding of Acconci Studio in 1988 to realize architecture and public-space projects, Acconci has pushed from one discipline to the next while always thinking about language and the boundaries of the body. Seminal public projects include Mur Island, 2003, Graz, Austria, where the studio designed a floating island that houses a theatre, cafe, and playground.

Learn more about Acconci Studio by visiting the website: http://acconci.com